Every day, people move easily across the Schengen areas of Europe, for work, for pleasure, for the business of life. For all the challenges this poses, and even with the pressure the system is under, this is an extraordinary achievement of modern Europe. My journey could be a written a million times a year.

We left Rome on 30 September, and took one last drive through the hills of south Etruria, northern Lazio. We drove up to Tolfa, with its stunning views, and history of providing alum for the dyeing industries of early modern Europe, the profits from which went to support the papacy and its lavish patronage, and also families such as the Medici and the Chigi who acted as distributors. 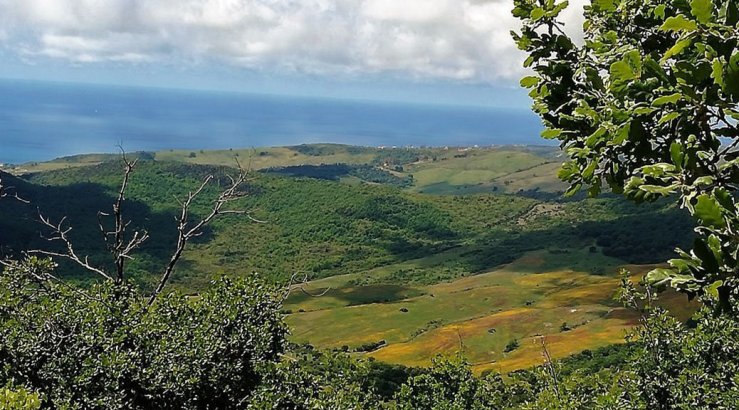 Then we drove down past the beautiful bath buildings at Terme Taurine, which were used from the second century BC into the imperial period. Trajan lived nearby, and it was his impetus which made Civitavecchia a key port site, part of the great chain of maritime sites which also includes Portus.

We were heading for the ferry, which landed us in Barcelona, on the night of the Catalonian referendum. By the time we arrived the violence was over, but the shock remained. The referendum and the heavy handed Spanish response reignited two hugely difficult arguments in Europe. The first is about the role of the regions below the level of national government. If national governments, and the distant EU, continue to fail to respond to local needs, and continue to be seen as irrelevant or inimical to voters’ interests, one remedy might be to return power to lower levels. Even within some quasi-nationalist rhetoric, the unit of power is often defined at a regional level – Catalonia, Lega Nord, and some of the right in Germany all have variants of this, as in many ways did the Brexit campaigners which was a substantially ‘English’ campaign. It is present too in the language of Scottish nationalism, but also shared with many commentators on the democratic deficit across Europe. It is not necessarily an extremist argument; it can also be part of the local-global debate.

But when Spain was seen to allow troops to beat up voters, and then suspended the government of Catalonia and arrested its leading politicians, in an area which suffered greatly for its fierce opposition to Franco, where was the European response? OpenDemocracy published a letter from over a hundred academics and politicians arguing that

The Spanish government, in its efforts to safeguard the sovereignty of the state and indivisibility of the nation, has violated basic rights and freedoms guaranteed by the European Convention on Human Rights, the Universal Declaration of Human Rights, as well as by Articles 2 and 6 of the basic law of the EU (the Lisbon Treaty). The violation of basic rights and freedoms protected by international and EU law cannot be an internal affair of any government. The silence of the EU and its rejection of inventive mediation is unjustifiable.

This view, that European institutions must be bound to hold the rule of law, is one of the proposals by the Centre for European Reform, led by Charles Grant, to ‘relaunch’ Europe. Taking a cue from the arguments which French President Macron has made (see), they suggest that ‘the EU should give its Fundamental Rights Agency (FRA) a greater role in enforcing the rule of law in member-states’ and ‘could also give the European Court of Justice (ECJ) a bigger role in enforcing the rule of law in the member-states.’ The outcome, they argue, would be to depoliticise intervention, but make the EU stronger in its capacity to intervene.

Here we see precisely how the Catalan situation has pressed on the painful memories of the EU’s difficulties with Greece and elsewhere. Criticised for intervening, and castigated for standing aside, the EU is struggling to balance its institutional defence of the rule of law and the political imperatives which fall under the heading of sovereignty – the different but equally troubling situations in Poland and Hungary are but another example of the same double bind, as well analysed by Heather Grabbe and Stefan Lehne.

The answer, to strengthen the non-political institutions of the EU, is exactly the sort of technocratic interference which at another level prompts dissent; but it is also the right answer – it requires a better alliance between politicians and administrators, and a general confidence to explain why independent arbitration is good at all levels, and not just in one’s own case.

Our destination after Barcelona was a small village about 50 km from the university town of Poitiers. Poitiers is a beautiful Romanesque jewel, rising high above the Boivre and the Clain, and a thriving bustling town.

It might have looked very different. Somewhere between Poitiers and Tours, on 10 October 732, Charles Martel led an army of Frankish and Burgundian troops to victory against the invading forces of the Umayyad Caliphate led by ‘Abdul Rahman Al Ghafiqi, Governor-General of al-Andalus.

The defeat of the Arab army was a major moment in European history, equivalent in many respects to the repulsion of the Ottoman Turks at Vienna. And to the extent that it insulated both parties from each other, it may have had a damaging effect on both sides. For the most part, and especially from 17th century France onwards, as the brilliant historian Alessandro Barbero notes, the victory was presented as the salvation of Christendom. Yet the Cardinal of Retz, Jean-François de Gondi, commented in his Mémoires that it would not have been such a bad thing if the Saracens had conquered France: ‘they could have introduced a taste for science and the arts.’ Likewise, we will never know the effect on Islam – it was after all a religion just over a hundred years old.
The battle is also notable for the first appearance of the adjective European, in the Mozarabic chronicle of 754, written in Latin by a Christian living in Spain. And indeed the way was now clear for Charlemagne to become rex pater Europae.

As we travelled a few weeks later across France and into Germany, it was fitting that our stopping point was the town of Fulda, a notable point of intersection over the centuries.

The Annals of Fulda carry the story on from Charlemagne’s successor Louis the Pious. His division of the Carolingian Empire between his sons, and their struggles, led to the Treaty of Verdun in 843. The artificial division of Europe into units not dissimilar from modern France, Germany and northern Italy had huge consequences. History does not run in straight lines, and the treaty surely reflected realities as much as creating them, but driving across the flat lands from Reims to Fulda, with the WWI battlefield cemeteries of the Meuse-Argonne on every side was a reminder of the uneasy past lying just beneath a placid countryside.

So finally to Erfurt, and two more notable anniversaries. We arrived on the 500th anniversary of the Reformation, the moment when, it is said, Martin Luther nailed his 95 theses to the door of All Saints’ Church in Wittenberg. And Erfurt played its part in this drama, for Luther entered the university on 1501, and the beautiful Protestant monastery, the Agostinerkircher, soberly preserves the memory of Luther in the town he ungraciously called a beerhouse and a whorehouse. Over the town tower the magnificent cathedral and the triple points of the church of St Severi, an unmistakeable skyscape, especially when lit against the dark November night.

Here, the respectful co-existence of Catholic and Protestant traditions acts as a kind of living memorial to the tragic division of Europe along confessional lines, which still mark national traditions and local loyalties. And if that fracture’s deep scars are still visible, there are others still more recent, more vivid.

A short train journey from Erfurt lies a town which has more than a small claim on history – Weimar. Now, rather sad and somewhat dilapidated in places, it was the very heart of enlightened romanticism – Goethe and Schiller, whose houses are the main attractions, shared an extraordinarily vivid creative life here and in Jena, and their joint statue, set up in 1857 outside the theatre where Schiller’s plays were performed, was famously copied across the globe.

The town even gave its name to the vivid, hectic, sparklingly radical and international culture of the interwar years.

But it is the inescapable irony of German and European history that just a few kilometres away is the site of Buchenwald, the largest of the concentration camps on German soil, and used as an internment camp by the Soviets after Thuringia fell behind the Iron Curtain.

The history of Germany from being the epitome of European culture, to the complex invention of Prussia, to a radically innovative and experimental reaction to a disastrous war, to the gates of Buchenwald, can all be traced within a few kilometres from where I write. And just a few days ago, Germany remembered its Schicksalstag, 9 November, the Day of Fate, anniversary of the Beer Hall Putsch, Kristallnacht, and the Fall of the Berlin Wall.

Weimar is currently hosting a quiet exhibition of the work of Gerhard Marcks and his friends. A sculptor and ceramicist, he was one of the first to join the Bauhaus in Weimar in 1919. Despite the persecution visited upon the Bauhaus under the Nazis, he lived a long life, and left an understated body of distinguished work. His friends were scattered in the aftermath of war, some trapped in the east, some escaping to America. Reading their biographies in the silent rooms of the Weimar Art Gallery gave just a tiny fragment of the extraordinary tapestry of the 20th century European tragedy. Amongst them, Marguerite Wildenhain’s wonderful ceramics turn back again to the world of ancient Greece, inspiration for a visionary and yet dangerous idealism, rendered by her as elemental and archaic.

Millions of people travel back and forward across Europe every year. There has been peace of a kind for seventy years, an unprecedented historical fact. Around a million people, mostly of the Islamic faith, were invited to enter Germany alone in 2015 to escape from the war torn Middle East, far more than were defeated at the Battle of Poitiers. At every stop and on every day and in every face there is a story, and it is often a difficult one to tell, to render comprehensible. But it is part of our history, and every time and place and person is linked. There is no end to the ironies and reminders, the paths not taken, and the paths that should never have been trodden. Against this deep historical background, the frailty of institutions perfectly to match their ideals to reality is more understandable, and our intolerance less forgiveable. The European Union can only ever be part of the unfolding of the continent’s flawed history.

Europe, from archaic Greek cities to 20th century internment camps, from medieval battles to memorable theatrical triumphs, from moments of unity to century long fractures, at war with the rest of the world, or welcoming it in, is so complex that it is perhaps best comprehended in glimpses and fragments. Yet the fragments are part of a story, in which the ruptures between us have seldom been other than tragic.