‘Processualism is …a world of actors but without reification of individuals and groups, a world of large forces but forces that must replicate themselves perpetually or waste away, an historicism without the dead hand of overarching historical determination, a symbolic analysis that does not forget the centrality of sympathy and action.’[1]

Given the sporadic and lacunose evidence from antiquity, we have often used comparison to help fill the gaps. As a heuristic exercise this has proven very helpful, and students of the ancient world have tended to be net importers of theory, although knowledge of the classics was fundamental to the development of many disciplines including anthropology and sociology.

However, what happens if we theorize the process of comparison itself?[2]  Michael Smith does exactly this in a succinct recent piece; noting the gains and losses of using case studies which keep detail but lack breadth and normative force, as opposed to largescale comparisons which require simplification but offer different, sometimes surprising outcomes.[3]

The advantage and disadvantages are more or less the same as those rehearsed for microhistory as opposed to global history. For archaic Rome and the Etruscan sites one of the dangers is that the substantial difficulties in arriving at reliable and comparable quantitative data make even a simplified regional model hard to develop, without importing assumptions which we might wish to resist.  If one has to say that all these settlements are quite like Athens, one has already conceded the idea of a sort of Mediterranean model.[4]  It is partly for this reason that Italy tends to enter such  global histories only in the second century BC, even if (whether rightly or wrongly) Greece comes in sooner because of the better quantitative evidence available.[5]

This has however left a much larger question untouched, which is the grounds of comparison itself.  An assumption of essential similarity across humanity simply leaves the question to the evolutionary biologists; it is an important point but it may not be from a historical or sociological point of view the essential one.

Yet the nature of our commonality is not a small issue.  It is precisely from the ground that lies between equality and sympathy that the idea emerges of the universality of our human experience.  François Jullien focuses on this in his account of the problem of the universal.[6] 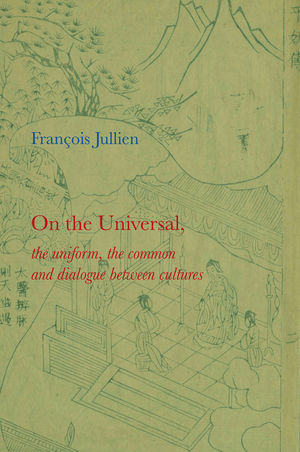 Jullien asks whether the universal is itself a European notion, theoretically or otherwise, and argues that it is, and the very act of producing universalist assumptions is an imposition of a worldview on a world that may not share those assumptions.  It is, to borrow Samir Amin’s term, another form of Eurocentrism.[7]   It is therefore unsurprising that we find ourselves asking questions about for instance economic growth across pre-capitalist societies.  That is not to say that the question is wrong, but it is a question for global history which may emerge, on reflection, from a particular standpoint in the modern world.[8]

Andrew Abbott’s Processual Sociology[9] enters this debate as a productive disruption.  Abbott’s essays add up to a methodological statement of his lifelong interest in how to do sociology differently, to move on from Durkheim, Marx and symbolism to a new synthesis, which places more emphasis on time and the individual than on the grander forces which have driven previous models.  Like the best developments, Abbott does not do away with these achievements, but rather builds towards something original and new. 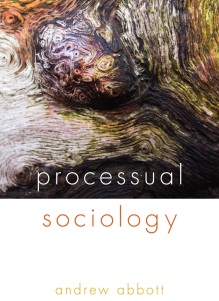 The centre to the theory, from which other ideas branch off, is a statement about human nature under the influence of time.  The influence of the development of sociology at Chicago, with its interests in institutional change and demography, are clear.  Abbott’s own account emphasises corporeal, memorial and recorded historicality,[10] and how these interact to influence the ‘developing lineage’ which is his unifying term for individuals and social entities.

Abbott roots his notion of what it is to be human in four key ideas:

the sequentiality of experience, and the formally narrative conception of the self;

the existence of a dialogue between habituation and novelty;

a bundle of guiding ideas, which he sums as ‘sympathy, oughtness and truth.’[12]

If the definition of human nature is a kind of Enlightenment project, the next step, which is to assess how society is constructed, owes much to the founding concerns of sociology.[13]  Abbott uses the very Chicago term ‘ecologies’ to denote a set of social relations that is neither fully constrained nor fully independent (and contrasted therefore with mechanism and organism on the one hand, atomism and reductionism on the other).  Ecologies involve actors, locations and a relationship between them.  Moreover, ecologies can co-exist and ‘link’ through alliances between subgroups in one and subgroups in another.  Much of the rest of Abbott’s account explores this through studies of the professions, including universities, and the pressure under which these concepts are operating in an accelerating modern world.[14]

There is one further argument to pull out before turning to the value of this analysis for pre-modern times and that is Abbott’s argument that sociology should adopt a lyrical mode in addition to its narrative mode in order to recreate the experience of social discovery.  Contrasting the narrative mode of sequence over time with the lyrical mode of insistence on the moment, and the moment as complete in itself and yet absolutely transitory, Abbott argues for a different way of sociological writing, and this obviously loops back to complicate any sense that the definition of human nature expressed earlier is only accessible to analytical narrative.  That would be to deny aspects of human experiences of time and reflection upon it.[15]

Taking the notion of linked ecologies first offers some real opportunities I think in moving beyond the by now generally accepted notion of heterarchy.  Abbott offers a view of ecologies as neither mechanical nor organic, but as mediating between individual and social forces and constantly made and renewed, part of a social process ‘consisting of events occurring to a current array of individuals and social entities, events which are then knotted into lineages with historicality (perhaps changing them distinctly in the process) and then perhaps encoded into the social structure instant by instant.’[16]

This is an interesting possibility in the search for some kind of middle range theory interposed between individual and grand social theory.

Meanwhile, a processual approach to the individual complements recent more person-centred approaches to archaeological investigation.[17]  More complex narratives can be envisioned, even if they are hard to demonstrate.  It is however tempting to think ‘lyrically’ about those moments where the archaeological record comes closest to revealing events which are knotted into lineages and encoded into the social structure instant by instant, with funerals and spectacles being obvious examples.

To what extent does Abbott help us go further and feel justified in pulling ethnographic observations of emotion and personal feeling into the ancient world?  On the one side, such an attempt is beset by the problem of the irony of the speaker and the subjective ethnographic standpoint.  On the other, Jullien’s problem of the universal looms.

One possible outcome is that the process of comparison should prove to be profoundly unsettling.[18]  Instead of comparison providing reassurance, working up and down the spectrum from individual to ecology to society may promote a respectful awareness of the diversity of solutions to local and general problems, which are situated between habituation and novelty.  Comparing across all levels would avoid either isolated individual case studies or oversimplified models.

Drawing out the consequences of this approach for claims of universality, as Jullien puts it, instead of looking for baseline universals, the diversity of cultures ‘is henceforth the decisive location for [the] exploration of the human to be played out.’[19]  The ‘thicker’ the comparison, the more it entails reflection on and contributes to a theory of comparison.[20]  So my challenge in thinking comparatively about early Rome is to test precisely how this can contribute to thinking more widely about the practice of comparison in antiquity and beyond.

[1] A. Abbott, Processual Sociology (Chicago, 2016), 292.  This post was inspired by different questions posed by Lyndsey Stonebridge and Corinna Riva, even if it does not answer them.

[3] M. E. Smith, The Importance of a Comparative Perspective in the Study of Ancient Economies (Bonn, 2018).

[4] On this see C. Riva, ‘The Freedom of the Etruscans: Etruria Between Hellenization and Orientalization,’ International Journal of the Classical Tradition 25.2 (2018), 101-26.  The most powerful account of the Mediterranean in antiquity remains P. Hordern, N. Purcell, The Corrupting Sea, (Oxford, 2000).

[5] See for instance the balance of chapters in W. Scheidel et al. eds. The Cambridge Economic History of the Greco-Roman World (Cambridge 2007).

[6] F. Jullien, On the Universal: The uniform, the common and dialogue between cultures (Cambridge, 2014).

[8] This is not, I stress, to accuse global history as a practice of bias; it has been a way in which dominant western narratives have been overturned, for instance by Amin, or Sanjay Subrahmanyam, but it is not always so.  For some of the critiques, not perhaps completely rebutted, see Sebastian Conrad, What Is Global History? (Princeton, 2016).

[10] ‘Historicality’ is defined as biological, memorial and recorded continuity of individuals and groups (Abbott, Processual Sociology, 8).  This puts me in mind of Ricoeur’s thoughts on history in Memory, History, Forgetting (Chicago, 2000), which emphasises the importance of the moment of record, of the historiographical act.

[11] This is similar to Castoriadis’ emphasis on the human capacity to imagine oneself as other.

[12] Abbott avoids making any claims about the content of these ideas at any point in time, but merely insists on their guiding human action.  They equate to emotion, action and meaning.

[13] Abbott takes issue with Durkheim at various stages, but see P. Snell, ‘From Durkheim to the Chicago school: Against the ‘variables sociology’ paradigm,’ Journal of Classical Sociology 10.1 (2010), 51-67.

[15] The literary turn in social sciences is well established, and equally literature can be seen as social scientific in intent and impact; see for a direct engagement with Abbott, S. Brinkmann, ‘Literature as Qualitative Inquiry:  The Novelist as Researcher,’ Qualitative Inquiry 15.8 (2009), 1376-94.  Such work reveals that Abbott’s definitions of narrative and lyric are rather too neat; it is not only in postmodern literature that these generic boundaries are challenged.  Abbott also leaves relatively unexplored the challenge of irony in the lyric “I” and its consequences for his method (see for instance D. Riley, Words of Selves: Identification, Solidarity, Irony (Stanford, 2000)).  The relative merits of solidarity and sympathy might be further discussed.

[17] E.g. close to my field, L. Shipley, Experiencing Etruscan Pots : Ceramics, Bodies and Images in Etruria (Oxford, 2015); and it should be emphasised that the broadening definition of the agency of the material has had the consequence of creating a helpful space for understanding the relationship between person and object; for example C. Malafouris, How Things Shape the Mind: A Theory of Material Engagement (The MIT Press, 2013).

[18] It is noteworthy that two of the four Balzan Prize winners for 2018, Marilyn Strathern and Jürgen Osterhammel, have engaged in challenging comparative work.  On Osterhammel see my blog https://anatomiesofpower.wordpress.com/2018/08/07/unfabling-the-east/.

[20] ‘Thickness derives from the comparative enterprise itself: its augmentation of quantitative differences and similarities, its processual and explorative character, and its demonstrations of the conditions and the limits of qualitative comparability.’  Niewöhner, Scheffer, ‘Introduction’, 4-5.