In a week which began with the centenary of the first Armistice Day, I have been reading Stephanos Geroulanos and Todd Meyers’ The Human Body in the Age of Catastrophe: Brittleness, Integration, Science, and the Great War. 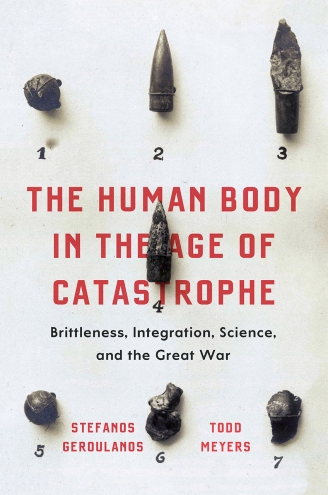 This tells the story of how the damaged bodies and minds of WWI soldiers forced a reinterpretation of the notion of the medical individual.  It begins with the tragic case studies that flooded into hospitals across Europe, men, largely, some of whom had physically and mentally disintegrated in unpredictable ways even in the absence of evident lesions or wounds.  A number of extraordinary physicians, Cannon, Head, Goldstein and many others, sought to explain the paradox of the highly particular responses to the collapse of an individual’s health and identity.

As Geroulanos and Meyers show the paradigms which were developed about the nature of the body’s self-defence and splintering collapse would rapidly transform psychology, and then sociology and anthropology, providing deep-seated metaphors around the nature of the individual and society which are with us today.  It is a book of phenomenal reach.

The challenge of shell shock and associated phenomena to a purely anatomical physiology was profound, and ran alongside the development of Freudian psychonalysis; it is argued here that Freud’s Beyond the Pleasure Principle ‘invented a system of integration that brought into psychoanalytic theory the profound traumas
and some of the epistemological pressures of World War I’ (208).  Ethnographic studies too showed that in other societies, the human body was conceptualized differently and could respond unexpectedly, to isolation for instance or to curse; Cannon became fascinated by voodoo; the medical debates in turn were seized on by Canguilhem and Lévi-Strauss.

Key motifs for the age were integration, crisis, and collapse; what kept the body together?  What drove it apart?  Could it be restored and how?  Yet it is obvious that these are metaphors not only for the individual but also for society more generally during and in the aftermath of the First World War.  As they write (260), ‘the 1920s international order relied on parallel registers of bodily and biological metaphors for the meaningfulness of the relations it described.’

In response to the question, posed by Walter Bradford Cannon, of ‘why don’t we die daily?’ physiologists searched for metaphors of homeostasis, the maintenance of balance.  Cannon himself saw internal stability as permanently threatened; ‘an internally generated, regulated, unstable life, a life that is ostensibly freedom and regulated excess, a life that, in tune with the external world of threat, is peril itself.’ (160).  The specificities of response to trauma, the focus on treating the individual, when what made the individual most visible to others, and sometimes most visible to him or herself, was their disintegration, paradoxically made the individual an increasingly solitary, desocialized and fragile entity.

How then did the pathology of the fragile individual translate into a theory of society?  The notion of the metaphorical similarity of body and society is ancient; but one specific outcome is the concept of a social homeostasis, the idea that society is intrinsically fragile, that its barrier to the outside, its skin, is hardly any defence at all.  The naturalization of the idea that society, like the body, is constantly trying to manage feedback systems, that it is constantly imperilled and can completely disintegrate, not so much because of an external blow as such, but because of the failure to regulate the consequences, was then productive of significant disagreement.  Social homeostasis can justify conservatism, or, as Norbert Wiener argued, it can disclose that ‘The Lords of Things as They Are’ are actually the most ant-homeostatic of social forces.

At the end of their book, Geroulanos and Meyers note that the translation of the fragile body onto a political stage could generate the imagination of a humanity that needed to be healed; Alfred Zimmern, critical to the construction of the League of Nations, spoke of ‘convalescent Europe.’  At the same time, they argue, if the emphasis is more on the atomistic systems within the individual which are ever in danger of overflowing each other or failing, the societal consequences destabilize the positive and integrated role of individuals and also legitimize external interference to force the ‘healthy’ homeostasis of society.  The citizen is then the part of the system that must be overseen and potentially regulated.  Traditional humanism will give way to the antihumanism of the 60s and 70s, which Geroulanos has studied so effectively elsewhere.[1]

It might be argued that if the disintegration of the physical body is one of the conceptual challenges provoked by WWI in a way that had never been seen on such a scale before, the disintegration of civic status was the scandalizing outcome of WWII.  Exile, statelessness and loss of rights were experienced on an unprecedented scale, and in millions of cases, the direct consequence was death.

When Stefan Zweig describes his response to his statelessness, he recounts the kind of collapse which Cannon, Head, Goldstein and others had seen in more extreme forms

‘I have not felt that I entirely belong to myself any more. Something of my natural identity has been destroyed forever with my original, real self.’ [2] 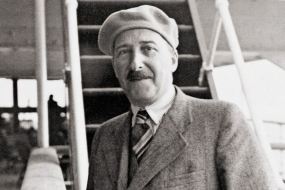 But as Arendt argued, and Lyndsey Stonebridge has shown, we have to go further than pity.  If Geroulanos and Myers are correct that it was precisely at the moment when the individual becomes foregrounded as the object of care that the conceptualization of the individual became itself a problem, so the acute attention to the case of the refugee or stateless person ought to bring us to question the notion of citizenship that allows that condition to exist.

The notion that society’s integration behind an ineffective ectoderm is constantly internally and externally imperilled is powerful and tragic in consequence.  The idea that invasion or penetration from without and dissolution from within are inevitable conditions of life, which must be guarded against and regulated, has obvious consequences for contemporary discourses over immigration and assimilation.  And once one has established the necessity of regulation and delineation, we are in the world of the border, with all its paranoiac connotations; as Stonebridge writes (172):

‘The nation state no longer binds us into an imaginary community, hence our panicked devotion to images of fences and ditches, barbed wire and concrete. Borders are a means of defensively reasserting integrity where there is little, in fact, to bind us together.’

It is scarcely a surprise that war on such scale should have so profoundly affected discourse; it is more telling that the effects have lasted so long.  Yet the description of the individual as emergent only via the moment of disintegration is potentially as misleading as the assumption that the metaphorical identification of individual and society is analytically true.  Whilst the discourse of self-actualization runs into all sorts of problems in Geroulanos and Meyers’ account, it is close to the only account which produces some sort of Aristotelian notion of flourishing, and therefore could directly relate the conditions of flourishing to socio-economic conditions.  The potentially enhancing meshwork of relationships between object, individual and group is thus rather left out of the intellectual trajectory they describe (which is part of their point).

We might start by looking elsewhere in the humanist tradition. Having experienced national and personal devastation, and in exile from Germany, Ernst Bloch started to think about daydreams, utopia and hope. 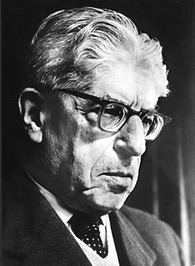 His notion of hope, rooted in a profoundly non-Freudian theory of human need, was communicative, externally focused and socialized.  At least one way to challenge the picture of the brittle, atomised, stateless individual is to insist that this is the extreme product of injustice, not the exposure of a natural state of affairs.  Instead of deriving an imperilled society from an imperilled body, one might deduce that individual avoidable misery is the symptom of a collective failure, which can be albeit imperfectly ameliorated.  In his own account of medical treatment, Bloch argued that

‘Health is a social concept, exactly like the organic existence in general of human beings, as human beings. Thus it can only be meaningfully increased at all if the life in which it stands is not itself overcrowded with anxiety, deprivation and death. … people cannot walk upright if social life itself still lies crooked.’[3]

[1] S. Geroulanos, An Atheism that Is Not Humanist Emerges in French Thought, Stanford 2010.