After a night of rain and wind, the sun shone, but for only a few hours today, the shortest day of the year, and the last winter solstice of the decade. 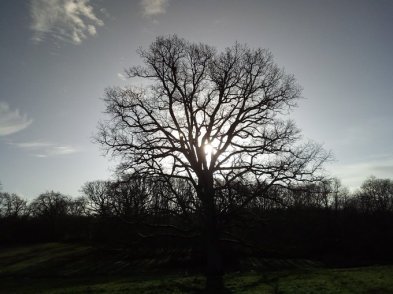 The celebration of solstice is old; around 3200 BC, the Neolithic Passage Tomb at Newgrange near Dublin was constructed so that the morning light shines through it.  Solstice is when the unimaginable forces that keep us in motion around our sun and the unfelt peculiarities of our obliquity, or axial tilt, combine to create an infinitesimal moment of suspension.  As Yves Bonnefoy wrote, ‘The scales of light tip no more. Shadows and dreams have equal weight.’

This seemed a good time to read Jedediah Purdy’s meditation on our current turning point This Land is our Land: The Struggle for a New Commonwealth (Princeton 2019).  It starts with the actualities of the transformation of the land in geological terms, in the terrifying transformation of the Appalachians and the transformation of American politics in 2016; traces the long history of the interconnection between concern over ecology and over standards of life; and concludes with the hope that the future might place value in ‘work that does what is necessary and sustains its own conditions of possibility.’

That process of valuing is necessarily a communal one, hence Purdy’s call for commonwealth – not necessarily governed by global sovereignty, but nonetheless a ‘community oriented to commonwealth ideals’ (97).  What is anathema to this notion of commonwealth is nationalism which denies the claims of those who are not our compatriots and global integration which unequally extracts resources from the planet.  We need sovereignty, but not sovereign entities driven by ‘the impresarios of denialism’ (99).

In the epilogue which Purdy cleverly calls ‘forward’ he notes that the metaphysics of valuing has to be built; it is not given.  And that is an observation made by John Rawls.  Two brilliant and important books have recently tackled Rawls’ philosophical formation and legacy.  Eric Nelson has placed Rawls, and liberal thought more generally, in the context of a debate about theodicy (the extent to which God can permit evil and injustice in the world) whilst Katrina Forrester has located Rawls in the context of a fading post-war consensus.[1]

When I first read Rawls, very naively and decades ago, the idea of deciding on the principles of justice from behind the veil of ignorance – agreeing the conditions of society without knowing where you might land – seemed persuasive, and it remains one of the twentieth century’s most influential and challenging arguments.  Sadly the veil of ignorance was doing a good job of concealing my own privileges and blindspots.  This has been one of the main critiques of Rawls’ position; his unwriting of historical circumstance and injustice is too extreme.  Forrester in particular argues that Rawls commenced from a belief that ‘deep down, social life rested on the possibility of consensus and ethical agreement’ (xx).  The problem is that the consensus was fracturing even as he wrote, and those who worked with the paradigm did not sufficiently identify how significant a problem this was – or indeed that the consensus that did exist was not necessarily supportive of their notion of distributive justice.  Thus, as the location of Rawlsian justice moved from the national to the global, it also may have moved further away from the practice of politics and into abstract theory.

Here is a reflection, on a political event, which acknowledges such a challenge, and suggests that the problems with Rawlsian arguments are deep-seated.  The ‘election represented not an “ideological revolution” – a collapse of faith in the welfare state or a belief in “free enterprise” – but a signal of the “non-ideological” nature of the British electorate and the failure of the Labour Party to persuasively set out its core egalitarian principles.’  This is not a comment on the election of 2019, but on Margaret Thatcher’s victory 40 years before in 1979, cited by Forrester.   If Rawls had learnt something from the debates in Labour under Crosland and Gaitskell, reflecting a postwar optimism about the future of socialism and distributive justice in a post-capitalist world, Ronald Dworkin would try to hammer out a version of Rawlsian justice through ‘rights, insurance, and the common law twinned with the efficient and fair mechanisms of the market’ (213).  Thence flow a whole range of elaborations on theories about luck egalitarianism, and the levelling out of the consequences of ill fortune.

This is very much part of Nelson’s argument.  If as a Pelagian, one assumes that we are free, we can assume also that the conditions of our freedom include the potential for inequality, and we have to decide what to do about it.  If as a non-Pelagian, we decide that the situation is ordained, there is a bigger problem to justify the situation, or to argue for its remedy.  Rawls, Nelson argues, tried to argue for our intervention to rescue those who suffer from the consequences of bad luck, despite remaining anti-Pelagian.

The twists and turns of this are fascinating, but seem to me to miss our current predicament in ways that are analogous to, but not quite the same as, those adduced by Forrester for the problematic starting point of Rawls’ theory, a belief in consensus.  Nelson’s core argument is that we cannot know if the existing distribution of natural assets is in fact just or unjust.  I think this amounts to two different sorts of arguments.  First, a sliding scale argument.  Some of my unequal share may be unjustly gained but not all, so why should I lose all?  What redistribution is correct?  Second, who knows whether the world would actually be better if the conditions which produced inequality were changed?  It is not possible that worse inequality would be created?

On the first point, this seems to work at a highly abstract level and for the issue of luck.  It is not luck, or it is not only luck even in its strained philosophical senses, that has caused historic inequality.  One way of interpreting the collective challenge offered by Forrester and Nelson is that in very different ways they show how difficult it has been to get from Rawlsian justice, which operates at the kind of community level that many moralists of the 17th and 18th century were thinking – the unfortunate man, woman or child in one’s immediate circle – to the wider and broader consequences of economic exploitation.  It is not only that too many of the people behind Rawls’ veil of ignorance looked the same, but also that they have had unique advantages in being able to swish the veil aside and make choices that leave them assured of a historically greater say in what justice looks like, in who makes the consensus.  In other words, scaling up from a morality tale to dealing with the enormous long term consequences of slavery or disposession leaves the notion of luck looking exceptionally thin.

One the second, we return to Purdy’s challenge.  It seems now very hard to argue that a pursuit of policies which will exacerbate or fail to slow the human impact on the environment is the best of all possible worlds.  With or without a veil of ignorance, the best claim might be that some will adapt and survive to altered circumstances; but the impact is universal.  It is perhaps the first time in our history where our decisions affect us all, even if unequally.

It is really interesting that at the end of his book Nelson suggests that the arc of the argument leads back to a notion of representation.  Rawls worried that tacit consent was not enough, and so we needed to strengthen on an almost objective basis the grounds of governance; the state’s violence over those who have not consented demands that we have a strong account of what justice means.  That was always a very good question to ask, and Rawls remains relevant because he asked important questions.  In response, Nelson argues himself into a justification that if the state behaves unjustly we could refuse to co-operate.  But if the principle of redistribution is not mandated by any theory of justice, Rawlsian or otherwise, what is the basis of our non-co-operation?   Evacuating the political sphere may not be our best option right now, though it might appeal to some of our leaders.  One does not need a universal objective standard of justice to want to see a persistent active scrutiny of government; the line between non-co-operation and inactive citizenship is a fine one.[2]

This brings us back to Purdy’s commonwealth of commonwealths, and the situation of remedy in the behaviour of individuals, valuing each other and being valued as equals.  But that also probably requires some fairly hard and very concrete arguments, and neither the past nor the future can be left out.  As Forrester implies, if we do not have consensus to fall back on, we have to rely on the capacity to manage disagreement.  The greatest enemy to that, and to active citizenship, is disinformation, which is why we are in such a dangerous place.

As Purdy says, we all live downstream; we are all subject to the consequences of previous actions.  But we are also upstream of our future, and responsible for it. The solstice is a moment of suspension, and the hope is that we, humans and the collective of everything that lives on earth, are by the extraordinary circumstances of our planetary fortune swung past darkness and on to light.  The question is whether the light will be guiding and hopeful, or the searching brightness in which there is no shadow to hide from the truth of where we have gone wrong.  Perhaps we need a bit of both.

[1] Eric Nelson, The Theology of Liberalism: Political Philosophy and the Justice of God, Harvard 2019; Katrina Forrester, In the Shadow of Justice: Postwar Liberalism and the Remaking of Political Philosophy, Princeton 2019.  Both have been the subject of excellent reviews; Samuel Moyn on Nelson https://www.commonwealmagazine.org/rawls-theodicy, and Jedediah Purdy on Forrester https://newrepublic.com/article/155294/john-rawls-missed-create-just-society .  See also Seyla Benhabib https://www.thenation.com/article/john-rawls-liberal-philosophy-review/ .

[2] Interestingly, one reading of Aristotle’s theory of redistributive justice argues for its focus on individual excellence, on the habits of morality.  Jill Frank argued that rather than try to make Aristotle present rather modern sounding arguments about the way a community should act, we should allow him both to reject external qualifications for office (for example wealth, freedom, good birth, which one might I suppose classify as the products of luck) and to insist that personal excellence is demonstrated through active citizenship.  See Jill Frank, “Democracy and Distribution: Aristotle on Just Desert.” Political Theory 26, no. 6 (1998): 784-802.